NanoValent continues to progress towards its goal of moving our lead drug candidate to an IND/BLA and the clinic in 2021 and 2022. Although our “almost virtual” infrastructure has us sheltering-in-place as a regular course of business, these are by no means normal times.

Yet, the contract manufacturing organizations working with us have been able to keep NV103 progressing towards GMP production both from the antibody targeting aspect as well as the core nanoparticle and internal therapeutic moieties.

We will endeavor to “stay safe” while staying true to our mission of bring a new therapeutic forward to the young children without options for refractory Ewing’s sarcoma.

This year we were able to start some novel NV103 work, advance our manufacturing efforts and are focusing on having publications in-press and being on the road to update you in person or digitally as the year progresses and our industry starts to get the upper hand on our latest new adversary COVID-19.

﻿The Problem with Chemotherapy

When one thinks of cancer treatment, often the first thing that comes to mind is chemotherapy and all the severe side effects associated with chemotherapeutic agents - nausea, vomiting, hair loss, sores, and fatigue. That's because chemotherapy is toxic, not only to cancerous cells but also to healthy cells. Think carpet bombing with napalm; it's going to do a lot of damage. One such chemotherapy is doxorubicin. Doxorubicin inhibits an enzyme called topoisomerase 2. This enzyme plays a pivotal role in DNA replication and transcription. Without it, cells cannot divide.

To circumvent this issue, scientists have found packaging chemotherapies inside liposome delivery vesicles helps reduce the off-target effects. Liposomes are microscopic vesicles composed of a phospholipid bilayer capable of encapsulating active drugs. The liposome essentially keeps the toxic agent inside the protective bubble until the bubble bursts. They have become popular as drug delivery systems owing to their efficiency, biocompatibility, non-immunogenicity, enhanced solubility of chemotherapeutic agents, and their ability to encapsulate a wide array of drugs while diminishing adverse "off-target" effects (Deshpande et al., 2013).

That's because cancer cell, with their irregular, leaky structure, causes liposomes to preferentially accumulate at the tumor site. When the bubble bursts, the chemotherapy agent is released. It's still napalm, but more localized. One of the most popular liposomal doxorubicin candidates developed was Doxil™ sold by J&J. Doxil™ sold several hundred million prior to losing patent expiration in 2017. But Doxil™ is far from perfect. Not all liposomes get "stuck" in tumors. Accordingly, there are still nasty side effects associated with using the drug.

NanoValent Pharmaceuticals is a small biopharma company developing a better approach. The company is advancing a new generation of Targeted NanoSphere (TNS) based products incorporating a highly optimized HPLN (Hybrid Polymerized Liposomal Nanoparticle) technology. These targeted nanospheres may provide a vast improvement in flexibility and choice for patients restricted by current treatment options both by repositioning existing chemotherapeutics and by optimizing the delivery of emerging small molecule, RNA, or biologic candidates.

HPLN is a new and unique nanoparticle encapsulating platform designed to harness and enable vastly superior targeting to the tumor and other specific cell surface antigens. Unlike other targeted technologies, the ‘payload’ incorporated into HPLN can be user-selected, including proven chemotherapeutic agents like doxorubicin. The slide below is from the NanoValent investor presentation. It shows significantly less circulating "free" doxorubicin with the company's HPLN formulation (left) and better viability vs. Doxil™ (right), which should result in fewer systemic side effects and greater efficacy.

However, NanoValent's platform is more than just an improved nanosphere liposome delivery vehicle. As noted above, not all liposomes preferentially accumulate at the tumor site. There's still free-floating liposomes that release the chemotherapy into circulation. NanoValent's solution is really quite ingenious. The company's platform technology creates immune-guided HPLN-based chemotherapies. So where previously older-generation liposomal encapsulated chemotherapeutics circulated the blood and hoped to get stuck in tumors, NanoValent's platform builds in a monoclonal antibody on the outside of the HPLN that can hone in on proteins found on the surface of the tumor cells known as tumor-associated antigens. The resulting candidate becomes a "smart-bomb" for any cell that expresses the targeted antigen.

A Smart-Bomb For Ewing Sarcoma

NanoValent's leading product candidate is a human monoclonal anti-CD99 antibody-targeted HPLN encapsulating the chemotherapeutic agent, irinotecan. The product, NV103 (CD99-HPLN/Ir), has been astutely designed for cancers that express high levels of CD99 on the surface of the tumor. CD99 is a glycosylated transmembrane protein that plays an essential role in many cellular functions, including cell adhesion and migration, cell death and differentiation, and intracellular protein trafficking. Over-expression of CD19 has been associated with many types of tumors, including Ewing Sarcoma (Ambros IM et al., 1991; Llombart-Bosch A et al., 2009), as well as neuroendocrine tumors of the kidneys and pancreases, liver cancer, brain cancer, and certain types of leukemia and lymphoma (Manara MC et al., 2018). By targeting CD99, NV103 becomes a smart-bomb for these cancers.

Initial preclinical data in model of Ewing Sarcoma (ES) with NV103 has been highly encouraging, showing the drug eliminates ES tumor cells and results in 100% survival (left), with results that look superior to existing commercial formulations of liposomal irinotecan, such as Onivyde®, including in models of disease where tumors have become resistant to Onivyde® (right). Importantly, the data also show NV103 treated mice had almost no irinotecan-associated toxicity and had improved bioavailability compared to Onivyde® (Kang et al, 2019).

NanoValent is currently working on preclinical toxicity and tumor kinetic studies before filing the Investigational New Drug (IND) application expected in 2021. ES is a highly aggressive bone malignancy diagnosed in pediatric and young adolescent populations. ES represents a significant unmet need where there are no approved targeted therapies. Approximately 30% of patients become relapsed or refractory to chemotherapy or radiation, and the 5-year survival rate for patients with metastatic disease is only 15-30% (John's Hopkins, 2019). Importantly, the over-expression of CD99 is a predictor of poor outcomes in ES patients (Guerzoni C et al, 2015). Something like NV103 might be the ideal product for treatment-naive or refractory ES due to the potential for improved efficacy and far better tolerability in children with the disease.

Common among the majority (~85%) of ES patients is the presence of the reciprocal EWS/FLI1 translocation, with the resulting fusion protein acting as the molecular driver for tumor development (Sorensen PH et al., 1994). Prevention of the EWS/FLI1 oncoprotein is believed to be a viable therapeutic target for the treatment of ES. Beyond NV-103, NanoValents is working on a second CD99-targeted HPLN candidate for ES, except this candidate encapsulates a CRISPR-Cas9 component that has shown the ability to knock down the EWS-FLI1 expression in vitro.

In fact, the initial data with NV102 (CD99-HPLN/CRISPR-Cas9) showed about 70% genomic cleavage in models of ES. These data were presented at the 2019 American Association for Cancer Research (AACR) annual meeting in March 2019 (Mitra SA et al., 2019). It is clear that CRISPR-Cas9 would be highly specific for ES and a CD99-targeted HPLN-encapsulated agent with reduced toxicity could become an important therapeutic option for patients with ES.

A Platform to Build Upon

NanoValent's targeted smart-bombs for ES look really interesting. Beyond NV103 and NV102, the company has plans to develop a CD19-targeted HPLN candidate for leukemia and lymphoma. CD19 is the target for the currently approved CAR-T products Kymriah® and Yescarta®. The company is also working on ultrasound contrast microbubbles to identify surgical adhesions. Adhesions are bands of fibrous scar tissue that form rapidly after surgery. They can lead to post-surgical complications and require follow-up surgery to remove them. Through the company's nanotechnology platform, they are working on ways to use ultrasound to identify adhesions prior to them becoming a problem for patients. This opportunity represents a potential for the company to out-license this work to a company interested in ultrasound diagnostics for additional non-dilutive capital, while NanoValent remains focused on cancer.

NanoValent's next-generation Targeted NanoSphere (TNS) / Targeted MicroSphere (TMS) platform has applicability in both cancer and diagnostic imaging. TNS / TMS has been developed to improve drug stability and bioavailability while targeting selected cell surface moieties. The company has been working in close collaboration with Children’s Hospital Los Angeles (CHLA) and Boston University (BU) to advance TNS and TMS candidates into preclinical studies. All work done to date has been funded internally or through SBIR grants. The company announced a $4 million SBIR grant in October 2018.

The primary focus over the next two years is on advancing NV103 into human studies for the treatment of Ewing Sarcoma. If the company can accomplish this goal, next-generation candidates for ES and other cancers and diagnostic agents should follow, making NanoValent’s an attractive target for larger pharmaceutical players. 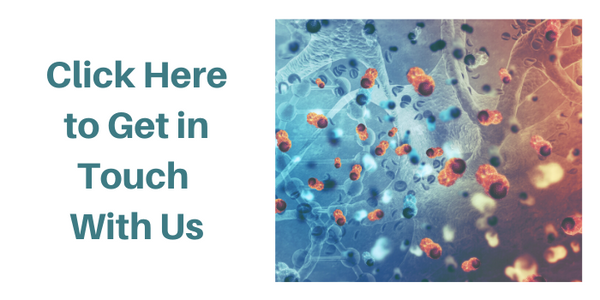 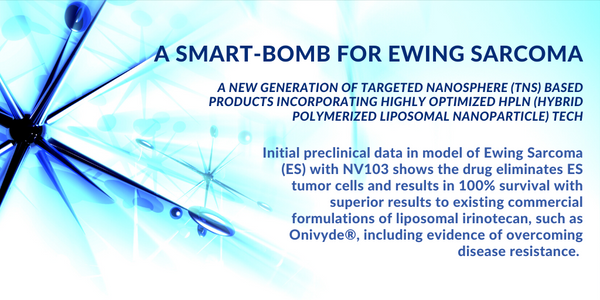 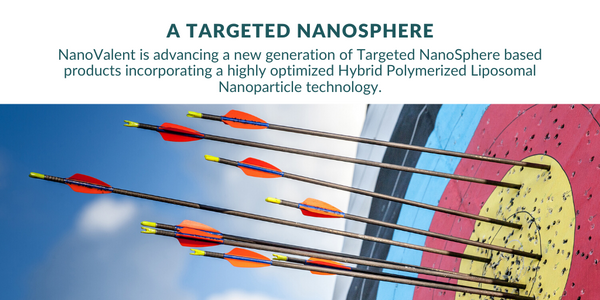 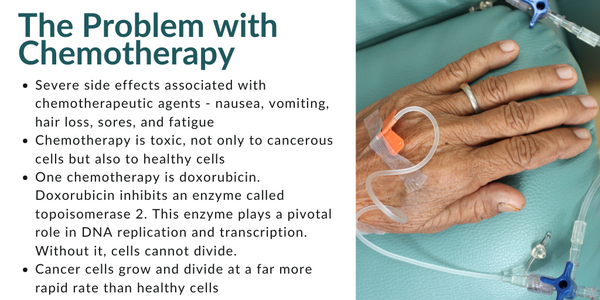 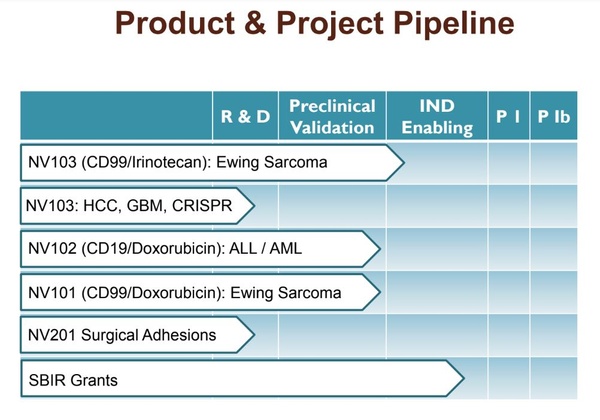 Related Bios
https://cdn.filestackcontent.com/HH7RhZBrRoeYYjET8CHD?dl=true
https://cdn.filestackcontent.com/AG3wH2AR3SP2Mo58NZitaz/rotate=exif:true/resize=width:600/HH7RhZBrRoeYYjET8CHD
Mr. Enns has over 30 years experience in leadership roles within various Pharmaceutical and Biotechnology companies. Prior to NanoValent he held senior executive roles at KineMed Inc, Astex Pharmaceuticals, Inc (now Otsuka) and Sequus Pharmaceuticals. Mr. Enns management roles have included Business Development, Corporate Communications and Investor Relations, Marketing and Sales. His prior experience includes most aspects of cancer therapeutic commercialization from start up through launch and partnering. Prior to Sequus he held senior positions at Trilex, Syncor, MGI Pharma and Upjohn. He has a BS in Nutritional Science & Biochemistry from UC Davis.

Timothy Enns
President and Chief Executive Officer
View Full Bio>>
https://cdn.filestackcontent.com/xlHfgS9XQhqxmcXeAOpI?dl=true
https://cdn.filestackcontent.com/AG3wH2AR3SP2Mo58NZitaz/rotate=exif:true/resize=width:600/xlHfgS9XQhqxmcXeAOpI
Dr. Nagy is co-founder of NanoValent and received his PhD in synthetic organic chemistry from Iowa State University in 1983, and completed doctoral training at UC Berkeley. In 1990, Dr. Nagy joined Lawrence Berkeley National Laboratory where he generated seven issued patents and 15 scientific publications, including a paper in Science related to polymer films and nanoparticles. In 1999, Dr. Nagy joined LigoCyte Pharmaceuticals as Director of Chemistry and Nanoparticle research. He is now a full time member of NanoValent.

Jon Nagy, PhD
Chief Scientific Officer
View Full Bio>>
https://cdn.filestackcontent.com/aRxGLW4JTrpaSnb9ytD2?dl=true
https://cdn.filestackcontent.com/AG3wH2AR3SP2Mo58NZitaz/rotate=exif:true/resize=width:600/aRxGLW4JTrpaSnb9ytD2
Dr. Triche is co-founder of NanoValent and is board certified in pathology and is on the staff of Children’s Hospital Los Angeles and a faculty at the University of Southern California. His expertise centers on the field of tumor cell biology. Dr. Triche has been a principle and founder in several publicly traded companies that have raised a total of $70M in public markets. He was co-founder of OncorMed, which was sold to Gene Logic (GLGC).